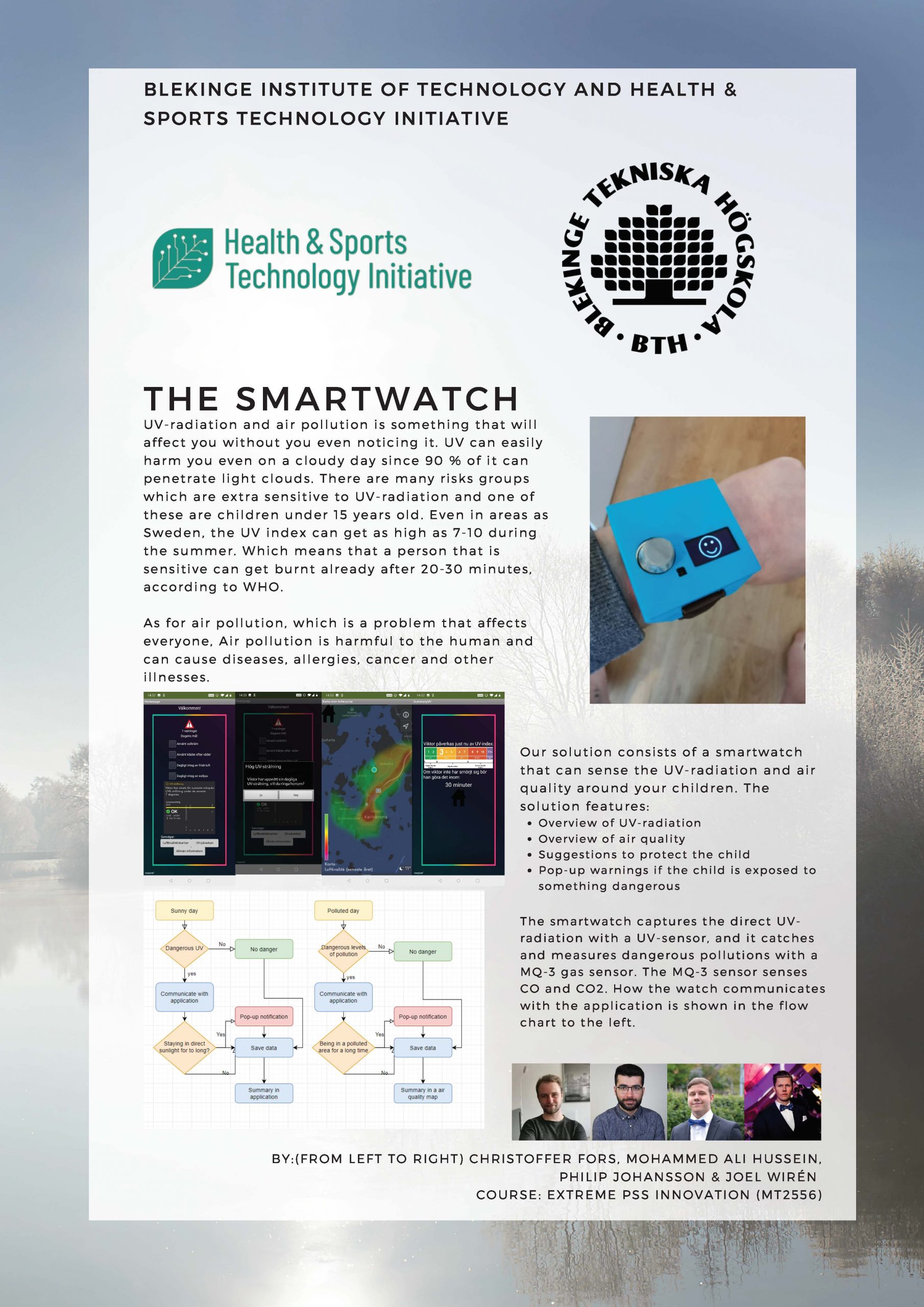 During the last semester has Health & Sports Technology Initiative involved a team of students from BTH to design a new gadget. Here you can se the video of their presentation

Below you can read an interview with the students

1. Tell us short about your project

The project task is to devise a measurement that can help improve health. It has a wide approach to it and can be implemented in many different areas such as sports performance, patients in hospitals, geriatric care, etc.
The use of smartwatches has grown rapidly since 2010. There are many different companies such as Apple, Samsung, Fitbit, and Garmin. The usage area seems to get broader and broader as the watches get more features added to them.  The project has a collaboration with the Sports & Health institute at Blekinge institute of technology.

Idea – The idea in the beginning was to use a Medical PPG testbed called Bloodlight developed by CodeThink. The PPG uses light to shine into the skin and reads the reflection of it. It currently has both red/infra-red and green LEDs on it. It runs on an open-source code and is available to everyone. Because the testbed was hard to work with, the team decided to use Arduino with added sensors instead to speed up the workflow.

Plan– The plan of the project was to follow the course workshops and use the methods and tools presented in the course “Extreme PSS Innovation”, because this project is part of that course.

Solution – The solution consists of a physical watch with sensors and a screen that is meant to be used by kids in the age between 4-8 years old, an app that summarizes and analyzes data collected by the “watch” and displays it to the parent in a way that makes it easy for the parent to take action.

2. What was the most challenging in this project?

The most challenging part of this project was to develop an app that would have all the functionality that we wanted, mostly because no one in the group has much experience in programming. This is why the app is simplified and mostly used for testing purposes.

3. How did you come up with the idea of a gadget for sun and air pollution protection?

By analyzing the market and seeing where we could find a “blue ocean”, going back and forth between different ideas that came up in the ideation phase, and because the team thought that this was an interesting segment to look deeper into.

4. What will happen with your project now?

It’s unclear at the moment what will happen with the project, but it is possible that we will keep working on it after this semester if we see an interest. 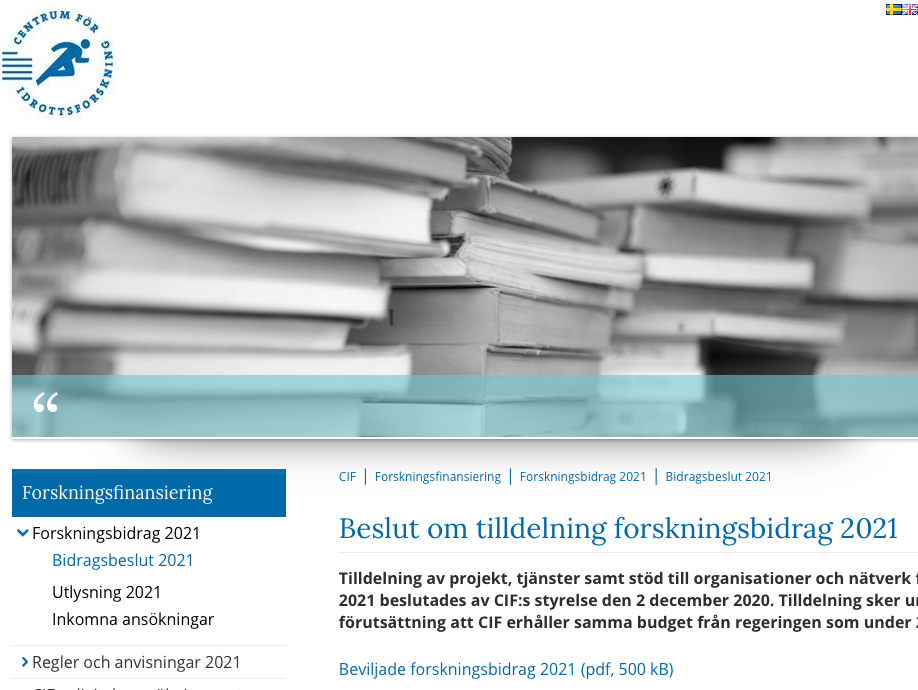 Health & Sports Technologuy Initiative at BTH have got funds fromt CIF- centrum för idrottsforskning to manage the Network for Sports Technology and Analytics and will start to set up three seminars for coaches in different places in Sweden.

The network also gives great oppurtunities to collaborate between Swedish universities in sport Technologies and analytics to share ideas and develop innovation to the sports. 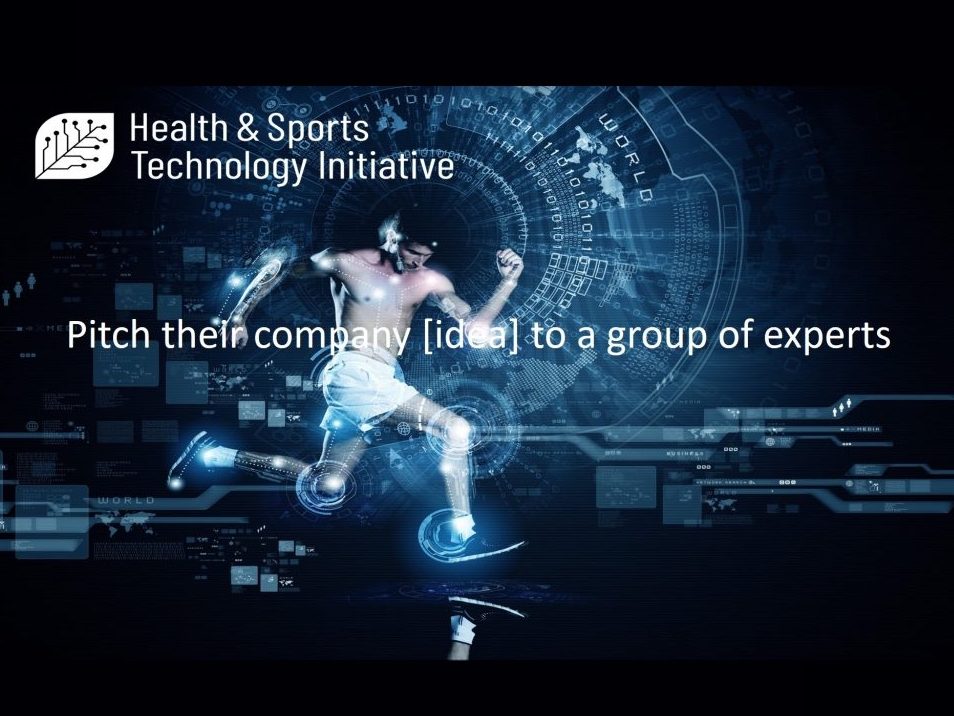 Pitch their company [idea] to a group of experts

Great succes when we hosted pitchday for companies in Health & Sports technology with experts from:

When do you get best effect of your training?

Mikael Mattson researcher at Blekinge Institute of Technology and project manager of Health & Sports Technology Initiative speaks in swedish radio Vetenskapsradion P1 about a new scientific report regarding, which time during the day you have best effect of your training.

Stina Lundgren Högbom – Global relation Manager from Health & sports technology Initiative, is invited to moderate at All That matters 2020.

Sports Tech Matters: Sports Tech from the Physical and Digital to the Phygital World- How brands Can take Part of this Phygital Growth and New Opportunities to Promote Health and Wellness.

As a start to develop the growing sport of Swim-run did our initiative host a workshop with regional clubs, race organizers, and profiles from Blekinge thursday 3th of september.

This workshop is a start to develop the sport Swim-run with technology, both for the competitors and organizers.

We will hold more workshop in Swim-run where we will invite different tech companies. Information of comming workshop will come up here.

Health & Sports Technology Initiative hold a workshop for sports students on thursday 3rd of september together with UF Blekinge.

As inspiration for the workshop we cooperated with Louise, Mathilda and Amanda that works with youth to inspire them in sports innovation.

During the day we got many new ideas and next step to develop our idea to involve youth in the sports innovation is to include other regions in Sweden.

Collaboration has been made between Kreativum Science Center (Kreativum i Blekinge AB) and the Health & Sports Technology Initiative.

The project Health & Sports Technology Initiative aims to meet societal challenges in health, linked to increasing lifestyle diseases and an aging population. At the same time, it is possible to create conditions for regional innovation and growth in health and sports technology by establishing a sampling form that can be used to integrate and apply knowledge from health sciences, computer sciences and technology sciences.

Kreativum is a science center that stimulates interest in technology, science, mathematics, innovation and entrepreneurship to meet future societal challenges. Kreativum’s mission is to help the region’s skills supply and increase innovation. Kreativum has built networks, an infrastructure with expertise in lifelong learning and how to inspire children, young people and the general public to deeper knowledge in science, technology and mathematics. Kreativum has about 60,000 visitors annually and a very large network in the regional business community.